Compiled by A. McCusker 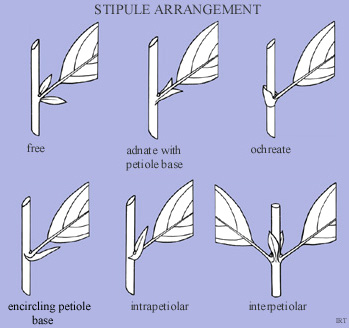 adnate: fused to an organ of a different kind, e.g. applied to a stamen fused to a petal. cf. connate.

interpetiolar: of stipules, between the petioles of two opposite leaves. cf. intrapetiolar.

intrapetiolar: between a petiole and the subtending stem. cf. interpetiolar.

obovate: similar in shape to ovate but attached at the narrower end.

stipule: one of a pair of appendages at the bases of leaves in many dicotyledons.